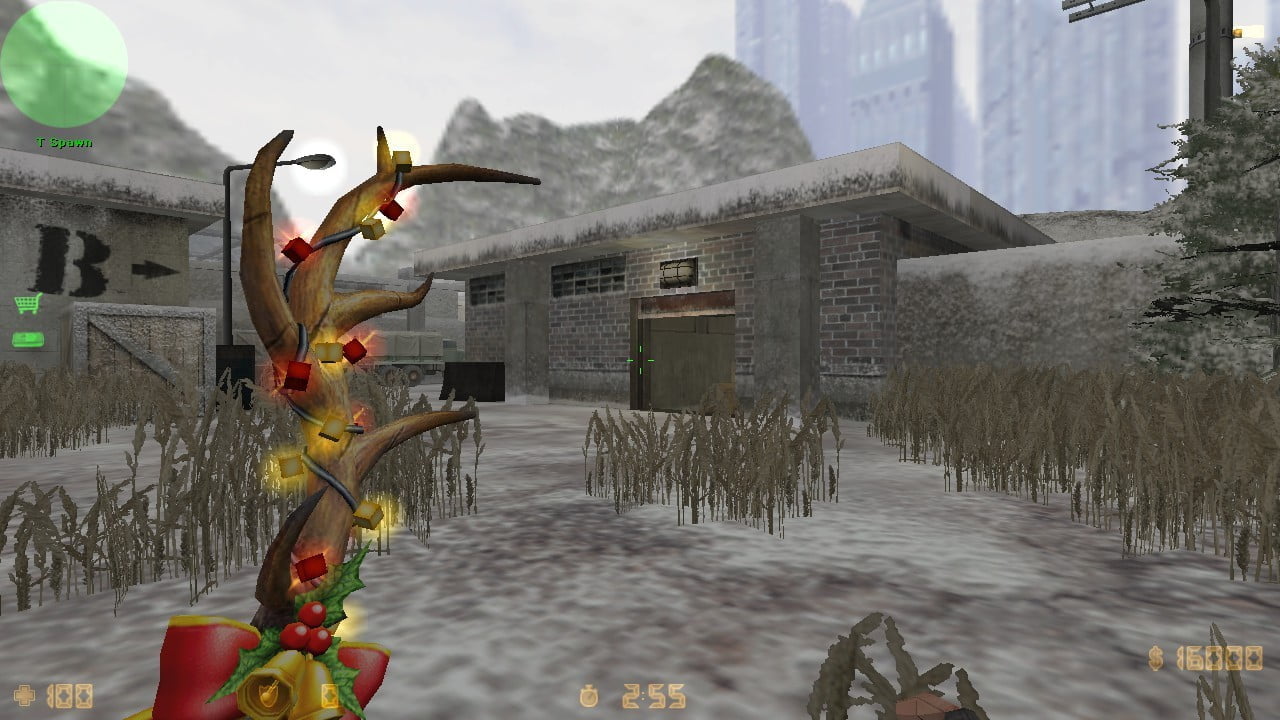 Early use of “Xmas” includes Bernard Ward’s History of St. Edmund’s college, Old Hall (originally published circa 1755).[9] An earlier version, “X’temmas”, dates to 1551.[9] Around 1100 the term was written as “Xp̄es mæsse” in the Anglo-Saxon Chronicle.[1] “Xmas” is found in a letter from George Woodward in 1753.[10] Lord Byron used the term in 1811,[11] as did Samuel Coleridge (1801)[5] and Lewis Carroll (1864).[11] In the United States, the fifth American edition of William Perry’s Royal Standard English Dictionary, published in Boston in 1800, included in its list of “Explanations of Common Abbreviations, or Contraction of Words” the entry: “Xmas. Christmas.”[12] Oliver Wendell Holmes, Jr. used the term in a letter dated 1923.[11] Since at least the late 19th century, “Xmas” has been in use in various other English-language nations. Quotations with the word can be found in texts first written in Canada,[13] and the word has been used in Australia,[7] and in the Caribbean.[14] Merriam-Webster’s Dictionary of English Usage stated that modern use of the term is largely limited to advertisements, headlines and banners, where its conciseness is valued. The association with commerce “has done nothing for its reputation”, according to the dictionary.[11]

In the United Kingdom, the former Church of England Bishop of Blackburn, Alan Chesters, recommended to his clergy that they avoid the spelling.[5] In the United States, in 1977 New Hampshire Governor Meldrim Thomson sent out a press release saying that he wanted journalists to keep the “Christ” in Christmas, and not call it Xmas—which he called a “pagan” spelling of Christmas.
he abbreviation of Christmas as “Xmas” is a source of disagreement among Christians who observe the holiday.

The December 1957 News and Views published by the Church League of America, a conservative organization co-founded in 1937 by George Washington Robnett,[16] attacked the use of Xmas in an article titled “X=The Unknown Quantity”. The claims were picked up later by Gerald L. K. Smith, who in December 1966 claimed that Xmas was a “blasphemous omission of the name of Christ” and that “‘X’ is referred to as being symbolical of the unknown quantity.” Smith further argued that Jews introduced Santa Claus to suppress the New Testament accounts of Jesus, and that the United Nations, at the behest of “world Jewry”, had “outlawed the name of Christ”.[17] There is, however, a well documented history of use of Χ (actually a chi) as an abbreviation for “Christ” (Χριστός) and possibly also a symbol of the cross.[18][19] The abbreviation appears on many Orthodox Christian religious icons.

Dennis Bratcher, writing for a website for Christians, states “there are always those who loudly decry the use of the abbreviation ‘Xmas’ as some kind of blasphemy against Christ and Christianity”.[20] Among them are evangelist Franklin Graham and former CNN contributor Roland S. Martin. Graham stated in an interview:

“for us as Christians, this is one of the most holy of the holidays, the birth of our savior Jesus Christ. And for people to take Christ out of Christmas. They’re happy to say merry Xmas. Let’s just take Jesus out. And really, I think, a war against the name of Jesus Christ.”[21]

Roland Martin likewise relates the use of “Xmas” to his growing concerns of increasing commercialization and secularization of one of Christianity’s highest holy days.[22] Bratcher posits that those who dislike abbreviating the word are unfamiliar with a long history of Christians using X in place of “Christ” for various purposes.

The word “Christ” and its compounds, including “Christmas”, have been abbreviated in English for at least the past 1,000 years, long before the modern “Xmas” was commonly used. “Christ” was often written as “Xρ” or “Xt”; there are references in the Anglo-Saxon Chronicle as far back as 1021. This X and P arose as the uppercase forms of the Greek letters χ (Ch) and ρ (R) used in ancient abbreviations for Χριστος (Greek for “Christ”).[1] The Chi-Rho, an amalgamation of the two Greek letters rendered as ☧ (Unicode character U+2627 ☧ CHI RHO) is a symbol often used to represent Christ in Catholic, Protestant, and Orthodox Christian Churches.[23]

The Oxford English Dictionary (OED) and the OED Supplement have cited usages of “X-” or “Xp-” for “Christ-” as early as 1485. The terms “Xtian” and less commonly “Xpian” have also been used for “Christian”. The OED further cites usage of “Xtianity” for “Christianity” from 1634.[1] According to Merriam-Webster’s Dictionary of English Usage, most of the evidence for these words comes from “educated Englishmen who knew their Greek”.[11]

In ancient Christian art, χ and χρ are abbreviations for Christ’s name.[24] In many manuscripts of the New Testament and icons, Χ is an abbreviation for Χριστος,[25] as is XC (the first and last letters in Greek, using the lunate sigma);[26] compare IC for Jesus in Greek.